I ran 8 miles along the American River bike trail.

Sunrise Blvd. to Old Folsom. It may have been 7 because the trails are unmarked, but I think it was 8. At any rate, I think that's the longest distance I have ever ran. woo-hoo. We will see how far I go next weekend.

Just finished post on a spot for Koval’s Trade Market. This was a branding spot for a new food store who is competing with Whole Foods and Trader Joes, while offering prices comparable to Raley’s or Vons. This a great opportunity to have a new business with no image history and create their public perception from scratch. We decided to go with a glossy, visually appealing ad. We shot it in HD with the HVX200, with a 35mm lens adapter using an 28-105 sigma zoom lens. We also had a .5 wide angle adapter we put in front of that for some semi-fish-eye shots. The spot turned out nice.

Here are some set shots: 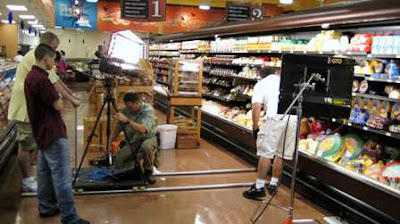 Setting up for a dolly-out shot in the cheese Isle. Mike on Dolly grip, and Jeff Bloch on lights. In the foreground is Mark, the store liaison. 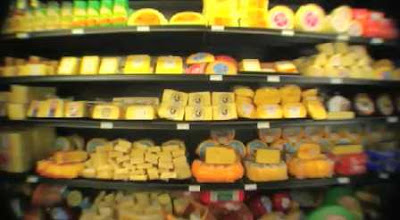 Here is the shot. 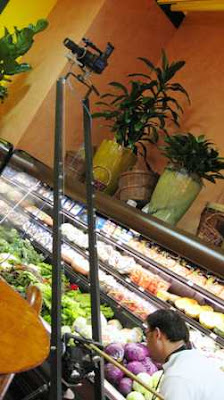 Jeff operating the jib for the opening shot. 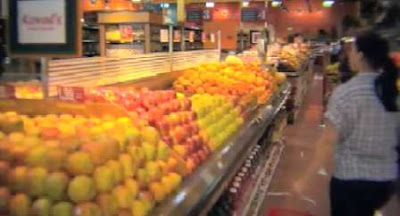 Here is the shot, starting in a tight CU of the Koval's logo on the basket, then pulling out and up over the store. 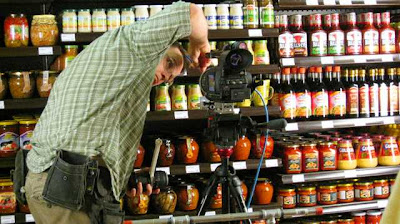 Changing lenses in the wall-o-foods aisle. 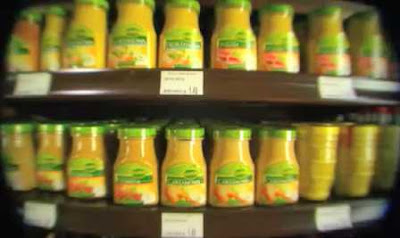 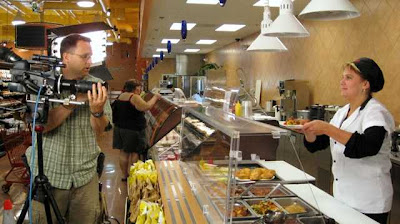 Working with talent in the hot foods section. 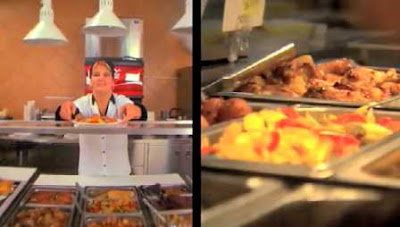 Here is the final shot, splitscreen with a CU of the hot foods.
Posted by Unknown at 2:23 PM

This last week I worked on a short film for a 10x10 challenge. (10 minute film in 10 days) I’ve always questioned the desire of people to do those, I mean if you are going to go thru the effort to make a short film, why limit yourself to one where you are under prepared and don’t have enough post time?!? I guess it’s like what I went through at film school. I always said I would never again partake in such an exercise, but last week… I did.

Why? For me it was an opportunity to work with friends, some of whom I hadn’t worked with in several years. We shot for 3 days, but I could only do the first 2. Unfortunately for me, they were night shoots that turned into overnight shoots... also I say, never again…

At any rate, I get to see the final film tonight, hopefully it will turn out as good as it looked through the lens. I also got to work with some great people and some great equipment. Here are some set stills taken by Andy Pischalnikoff (http://www.doctorlegacy.com/): 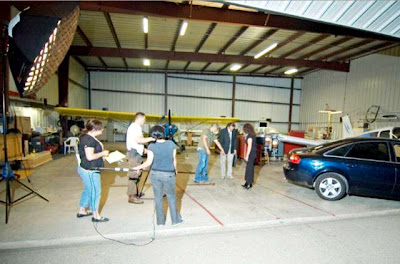 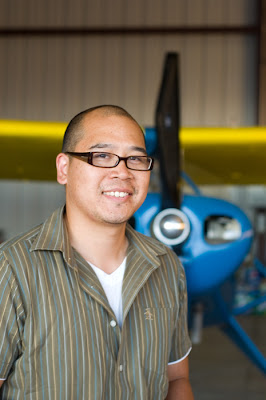 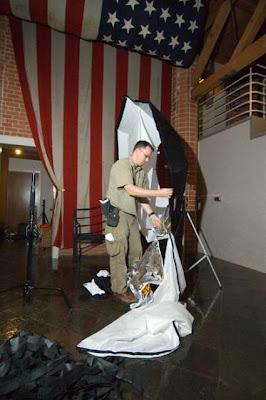 Night 2, night interior and exterior. Here I am building my new light, a 7’ 1k softbox. It took a while to build and rig, but once it was set, we were lit for the scene. 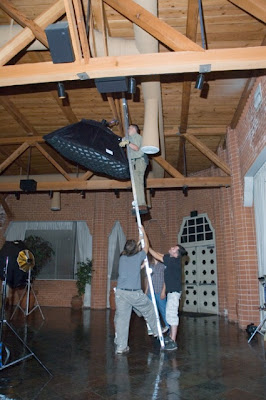 Setting the light 20’ up with a mafer clamp on to a 2x6 beam. The light had a safety cable, I wish I had one! 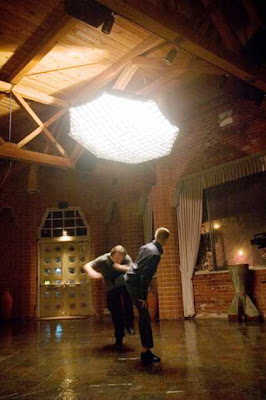 Once the light was set, it was worth it. 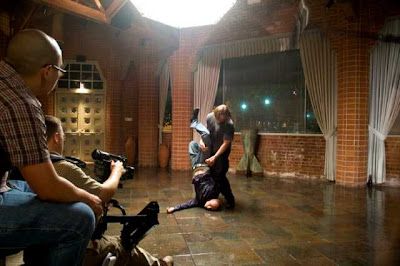 Another angle with the director and myself in the corner. 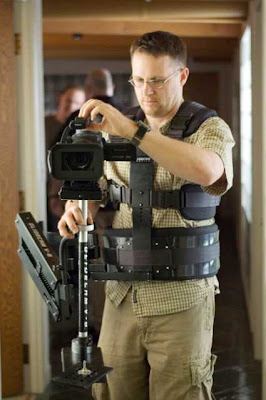 I got to fly a glidecam, yea! Always love that. 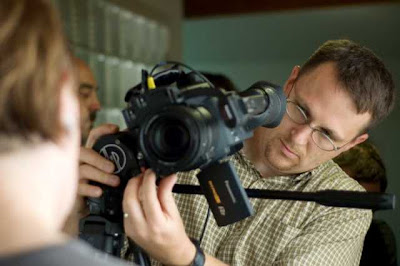 A Dutch camera trick my friend and SoCal DP Eric Petersen showed me on my first film. Thanks Eric!
Posted by Unknown at 10:37 AM

I've just finished post on a 1950's Technicolor style musical commercial for a local client. The budget was small, and we put way too much work in on this spot, but it was just too much fun to stop… 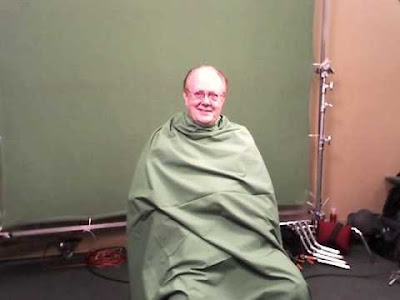 This is my Father playing the roll of “The Dad” 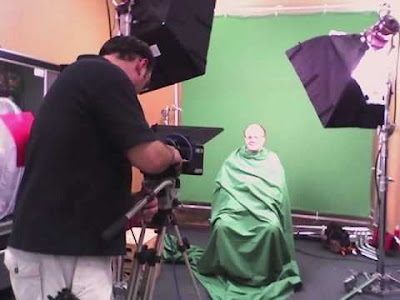 And again, showing the lighting setup. 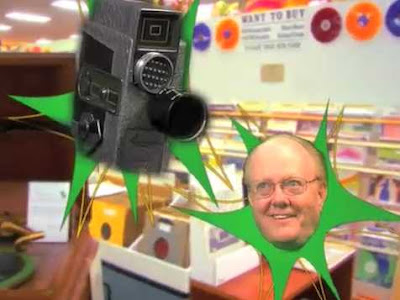 Here he is in the final composite. 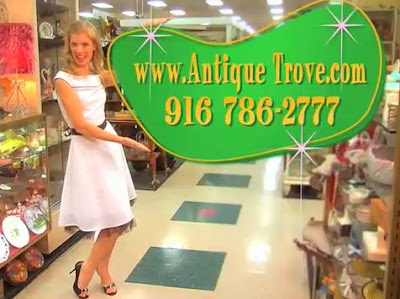 This is a frame grab from the final edit, staring Susan Fore.

You can view the spot online here at: www.emrl.com/j/downloads/AntiqueTrove.mov
Posted by Unknown at 11:29 AM