Completed the bridge for my Christmas project...

Building round corner pieces for my Christmas project.

I found some old Super8 film I shot at Noisefest almost twenty years ago...

Floyd coming up the old erm stairs with breakfast for the bands.

Now that grades are done, this is my Christmas project...

Once upon a time, (Specifically the early 1980s, before the internets) There was a radio station in Sacramento: KCTC (known as “Sunny 1320”). They played what is referred to as “Adult Standards.” Music of this style includes Neil Diamond, Frank Sinatra, Broadway Show Tunes and weird instrumental versions of current popular top 40 songs. It's what I grew up listening to. It is today the only music I opt to listen to (besides movie soundtracks, bagpipes and early 80s technopop.) No one came close to them in ratings. They were king of the airwaves. Their tag line was “Soft Music That Feels Good.” All was beautiful, all was easy.

Then the change happened.

The ratings companies (at this point, I'm going on my foggy recollections from the 80's, please correct me if I'm wrong) changed their ratings standards. Instead of measuring the number of “ears” listening to a radio station, they started value weighing the listening environment. What that means is that instead of counting all 100 people shopping at Safeway listening to the music playing the background, they gave a higher score to one person listening to headphones or in a car driving to work. This makes sense, but it also knocked the wind out of the mighty KCTC sails. Because instead of KCTC being given credit for all the shoppers in Sacramento, they were only given credit for me, my Dad, and the handful of elderly people who still had their driver's licenses.

Overnight the ratings were gutted. KCTC dropped from king of the hill to bottom of the barrel. None of this really mattered to me however. I continued on in my velvety acoustic bliss. That is until The Algore. After The Algore invented the internets, he turned his attention to something more sinister: a massive system of liberal talk radio designed to crush the dominance of conservative talk radio. This was, of course, doomed to failure (just like New Coke, the McDonald's Arch Deluxe, WebTV, or Hypercolor clothes) But that didn't stop the Algore. He had momentum. He had investor confidence. He had enough allegedly shady investment money get his “network” to take over 66 terrestrial broadcast stations – including my beloved KCTC. On November 1, 2005 KCTC switched from the Adult Standards format to the Progressive Talk format (useless on sooooo many levels.)

For this, no matter how much of a comic cartoon he is, I can never forgive The Algore.

He took away my audio base, he took away my acoustic form, he took away my tunes. After "Air America" flamed out, the Prog Lib format was replaced by the sports talk format. Now I don't blame the current occupiers of the 1320 bandwidth marker, I just have no interest in their current content.

Many years of loss and acoustic sadness went by. Probably at least 20. I moved on. Sold all my records. Gave up on music. Yes, I gave up music. The only music I would welcome into my heart were my genetically connected ancestral clan bagpipe tunes, movie scores and the 80's pop songs of reminiscent of past teenage adventures.

The music of my childhood had passed. Until I got an LG Optimus smart phone.

One day whilst scanning the Android App store, I found the TuneIn app. This application (what happened to the word “program”?) allows the listener to listen to music based not just on genre, but also based upon preferred musician. I tried it out. I typed in “Neil Diamond”. I found something called “Music of Your Life”

It turns out that the music on 1320 never died. Unbeknownst to me, at the time I listened to KCTC, they were most likely not playing in house DJ selected music. Rather, they were playing music streamed from a satellite on the “Music From Your Life” network. This Network has about 50+ radio stations nationwide (Just not in Sacramento, thankyou goddamnyou Algore...) The network is still very much in existence. They still have famous host Djs such as Peter Marshall, Johnny Magnus and Pat Boone. They are also the entity responsible for the late night and Saturday afternoon Time-Life Music of Your Life CD infomercial.

They also broadcast not only on the olde fashioned terrestrial stations, but also on the new-fangled internets stations as well. All of the original programming from Sunny 1320 was once again available to me! In short, thanks to a bizarre quirk of Karma, the man who killed my listening pleasure via the “Air America” turd, was the same man who (thanks to his invention of the internets) returned the music to me!

After my acoustic elation, I was discovered another feature of the TuneIn Application: the “Related” function. Much like Pamdora, this led me to other online stations, the most importance of which I discovered is “AirstreamFM” They refer to their style as “Beautiful Music Radio.”

AirstreamFM plays not only the Adult Standards I have come to love, but also THE MOST obscure versions of those adult standards.

The Radio station was started by two friends who had an interest in “soft music that feels good.”

They build a radio station and play just that. Most of what they play is not available on the radio, CD or even iTunes. Most of it is from their 2,000+ personal awesomeness record collection. To me, this is like “Sunny 1320” on Lance Armstrong steroids. Booyah! Thank you internet overlords, my life is (once again) good.

Scouting for the short film class At the tower theater in Roseville.

Scouting for the short film class At the tower theater in Roseville.

setting up the switcher for the awards show tonight.

Midterms for the multicamera class. Each student has to set up the cameras and audio and remote switcher and broadcast to the internet in 20 minutes. Pressure!

If the Batmobile is too upscale for shopping at the swapmeet - time to use the Batvan!

If the Batmobile is too upscale for shopping at the swapmeet - time to use the Batvan!

Well, this worked better than expected...

The final project for my cine class is to emulate the aesthetic of a randomly assigned painting.  One of my students was assigned "Wanderer above the Sea of Fog" by Caspar Friedrich: 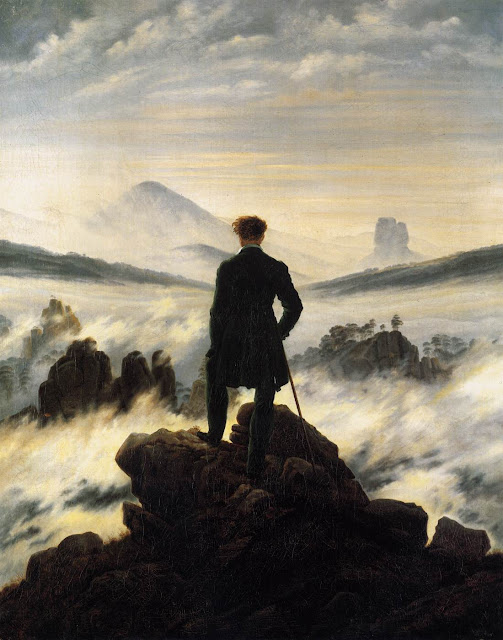 We were brainstorming ideas on how to emulate the dynamic background in camera without actually standing above a sea of fog (which BTW is possible on a predictable basis about an hours drive west of here...).  I remembered this:

I thought if you could make the bokeh look like stupid hearts, why not something more useful to the story?  So instead of a heart shape, I made a slit (135mm Kmart lens f2.8 on a 7D):

Here are the results, before and after: 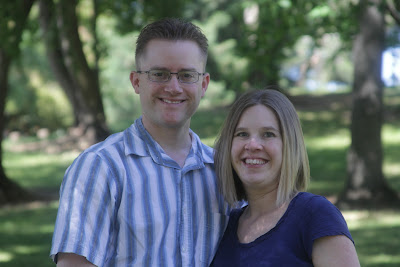 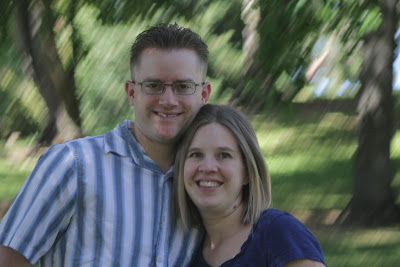 Here it is in motion.  Forgive the shaky footage, I was handheld on a 135mm...

Blogger embedded video is pooptastic. Here it is in better quality on Vimeo:

Not bad for a quick test (the blogger playback doesn't do it justice...)  I told the student about the successful test.  If he decides to incorporate the technique I'll post a follow up...  It gives me lots of ideas on how to take it to the next level.  If this technique inspires you on a shoot then let me know, I'd love to see the footage.

Here are some pics from the eclipse today: 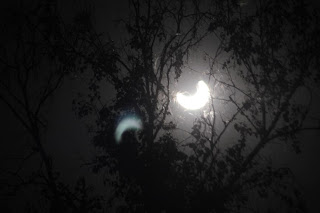 A direct shot of the sun with a 200mm brAun lens (yes, the same guys who made my shaver).  Uncorrected, just white balanced for the greenish tint of the glass.


A rack focus from the tree to the sun.  It's hard to get the dynamic range of both in the same shot.  Normally the sun would just blow out and it'd read as a big ball o' white, but if it's got a different shape and you want to retain that... 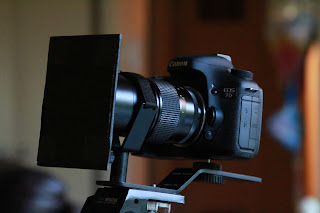 Shot with a 7D with a #10 welding glass taped to the front. 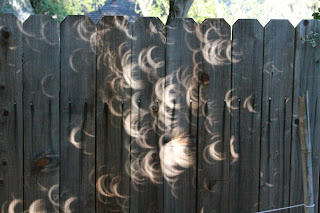