This spot was for “LawnMiser”, a device that measures the moisture content in your yard and adjusts the sprinklers for optimal saturation. The client wanted an attention grabbing spot, and that’s always good to hear, but how do you convey the technical aspects of the product without sounding clinical? 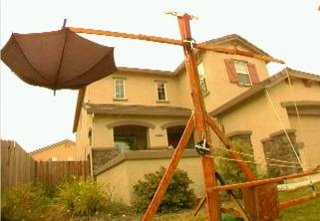 
Here is a rough sketch of the device:
(click to enlarge) 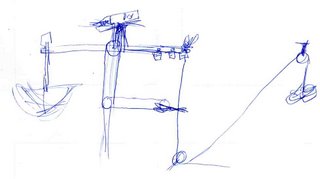 As the water from the sprinkler fills the umbrella with water, it pulls an arm down. 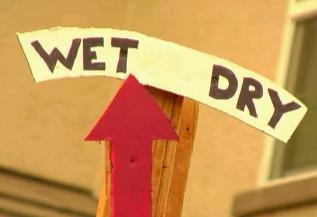 As the arm moves an indicator dial moves from “dry” to “wet”. While the umbrella moves down, the other end of the arm moves up, pulling a rope, this rope, attached via pulleys, pulls a boot (mine) up. Simultaneously, as the arm moves, a pair of scissors (connected via cables and pulleys) is pulled closed, eventually cutting the rope, thereby dropping the boot, falling on a valve, shutting off the water supply to the sprinklers.

a) I was able to build this thing out of parts lying around.

b) It actually kind of worked. (almost, would have…)

As I was putting this thing together I also thought it would be cool to dis-assemble the unit 98% and with the help of fishing line, film it falling apart. (although we did have a collapse during production that set us back about an hour…) As it turned out, I’m glad I did because even though it wasn’t in the original storyboards, It fit in very well at the end of the spot to bring home the point.

At any rate, you can download a copy of the spot here:

An over-crowded shuttle ride took us to JFK and the famiar Delta terminal. Our flight ot Salt Lake City got in early (!), but the flight to Sacramento was overbooked. We volunteered to sell our seats for a later flight and found ourselves with a 7 hour lay-over. What to do?

We thought about taking the free Mormon tour to the tabernacle, but the pressure to join would be too strong. We decided to catch the public bus into SLC and see an IMAX movie at the mall. We got bored while waiting for the public bus and rented a car instead. We headed up north a bit to visit Antelope Island. It’s an island in the middle of the Salt Lake, connected by a 6-mile causeway. We picked a beach in a cove and I took off my shoes, rolled up my pant legs and went for a stroll. I walked out about 100 yards but it only went up to my knees. There are no fish in the lake, but there are brine flies. Billions of them.

They hatch in the lake, but are blown to the edge of the shore. There are so many of them, they turn the white shore black. They don’t bite, but they do flock around you. With each step you walk they fly off like waves on the ocean. Way cool when walking barefoot.

On the way back we drove past a parked “It’s a truck-It’s a boat-It’s a truck” thing. I’ve seen them in Monterrey, London, and Dublin, but Salt Lake City?!? I mean it, those things move s-l-o-w, what could there possibly be to see?!?
Posted by Unknown at 2:25 PM

Today was our last day in Ireland :-(

We dropped off the rental car and boarded our plane at Shannon airport. After a 3-movie flight across the Atlantic we landed at JFK. We took a shuttle to our hotel, dropped off our bags and caught the tram and subway into Manhattan (a 1-hour ride on the “E” train). We exited on the last stop, the World Trade Center station.

It was powerful to see it in person, I only wish I could have seen it before. We headed on foot (East?) toward the water to catch a glimpse of the Statue of Liberty. It wasn’t more than a block before I spotted a 9-light and a 12k on a condor. Hmmm… Then a Panavision NYC truck, then a crowd. Turns out they were shooting “Spiderman 3” and setting up for a stunt shot. I talked to a grip who was rigging a process trailer with a frame of truss and a winch to do wire work of a person (Toby?) being pulled off a moped while driving down a Manhattan street. Way cool, but I’m on vacation and this feels a little bit like work.

We passed a hotdog cart and bought a pretzel and a Gatorade (What no crab juice?!?) then took the subway to the pier section and caught a 2hr cruise around the island. We got a nice close view of the Statue of Liberty. The sun set and we watched the lights of the city turn on as we came back to port.

Once we docked, we walked the short distance to Broadway. It was easy to tell, just follow the lights… From there we headed up to 53rd street and caught a glimpse of the famous Ed Sullivan Theatre and the even more famous Hello Deli. Unfortunately they were closed :-(

Our next stop was to be the Empire State Building, but to get there was a bit of a walk, and we were fast approaching a 24hr long day, so we hailed a human powered bicycle rickshaw cab ($20). Riding down Broadway at night under the lights – so cool! Siobhan was a bit nervous with all the weaving in and out of traffic, and the taxis honking at us and all… But I wasn’t nervous, after all I’m sure our driver was experienced and knew what he was doing… right? Turns out he was a new citizen from Azerbaijan, and he had only been in the country for 3 weeks – D’oh!

We arrived safe enough and while the lobby of the Empire State Building was magnificent, we decided not to pay the $16 to go up to the top. It seems the top was in the clouds, and visibility was zero. People coming down said it looked like a big grey wall…

Exhausted, we made it back to the subway for the 1hr return trip. Instead of taking the tram though, we decided to take a taxi to get back to the hotel. It turns out our driver was driving an “unlicensed” cab. It was just a guy and his car, no meter. But oh well, we had a pre-arranged price ($10, same as the tram) and got back to the hotel soon enough. (Bed!!!)
Posted by Unknown at 12:47 PM

After a nice Irish breakfast we left our farmhouse B&B and drove south to visit the “Marble Arch” caves. This cave was carved underground by a river. It’s fairly big and has some good formations, but what makes this one special is the length. The tour is about 1km, and part of that was by boat. Totally Cool.

Afterwards we drove south and got to the cliffs of Moher in time for the sunset. For dinner we walked down to the beach and found a pub. I had my last bowl of Irish Stew (damn good!) and we listened to the band for a while before catching the sunset.
Posted by Unknown at 2:41 PM

Today was our most event filled day. We had a full Irish Breakfast which included Bacon, Eggs, Potatoe Bread, sausage, has browns and something called “black pudding”. I don’t know what it was, and I don’t want to know till I get back. All I know is that it was black with whitish things in it, it was mushy and about the size of a hockey puck, and tasted like liver…

Our B&B had an amazing location, we woke to a panoramic view of the ocean and sea cliffs. At the end of the driveway was a cliff about 300’ above the sea. Attached to the cliff was a small island peninsula, and on top of that were the ruins of an old castle. We explored that for a while then went on the see the “carrick-a-reed” rope bridge. This rope bridge was built by fishermen in the 1600’s to allow access to an island for fishing salmon. The bridge dangles above the crashing waves below. Totally fun.

Our next stop was the “Giant’s Causeway”, a weird geologic formation of hexagonal columns of rock about 2’ in diameter that vary from about 1’ to 6’ tall and form a jetty that leads out into the ocean. Hard to believe, too weird to describe.

We had lunch in an old 1-room schoolhouse converted into a pub. I had “Steak and Guiness Pie” and Siobhan had her favorite: “Cheese and onion toasty”

That afternoon we went to castle Dunlace. It too was built out on a rock in the ocean, but this one was a massive, and was connected by a bridge to the main land that (back in the cay) was a drawbridge that could be raised to ward off attackers. It also had several large cannons (salvaged from a nearby shipwreck) pointed at the bridge so if any invading army tried to set up their own bridge, it would be blown to bits. This castle was in partial ruin, but it started in the 1700’s when on stormy night part of the rock island gave way and took the backside of the castle with it, including the kitchen and several of the servants.

After that we stopped by the city of Derry to visit the old walled city center. North Ireland in general is more economically depressed than Southern Ireland, but it shows most in the urban areas. There was lots of graffiti, but it was mostly political. I also saw several building sized murals that had political themes. Before leaving Derry, we stopped at a mall and bought some socks and underwear. (I was beginning to run out…)

That evening we drove to Ennikskillen. On the way there we passed a fish and chips place that had a packed parking lot – a good sign. It was to go only, so we took our dinner to the next town and hand an impromptu picnic on a riverbank next to a stone bridge from the 1600’s (common)

When we got to our B&B, the owners let us use their computer to update the blog. When I asked if they knew what a blog was (they were old…) they said yes, they were following their son’s blog as he climbed Mount Everest.

What?!? Yes, he is climbing Everest and they are using sat phones to update their blog to raise funds for cancer research. Whatever ego my blog once had…
Posted by Unknown at 5:51 PM