The new music videos for Freex and Olson Olson are done! The Freex video was for the song “Box”. It was shot inside a 7’ box.
You can download it here (9 megs):
http://www.emrl.com/j/downloads/Box.mov

The Olson Olson video is for the song “En Passant”. We shot the performance footage on a white cyc stage at The Studio Center in Sacramento. The narrative footage was shot in HD with an HVX200 (for the slow-mo) with a 35mm adapter. We shot near the American River and in a Safflower field outside Davis.
You can download it here (13 megs):
http://www.emrl.com/j/downloads/EnPassant.mov
Here are some location stills:
Shooting on a bridge over the river. 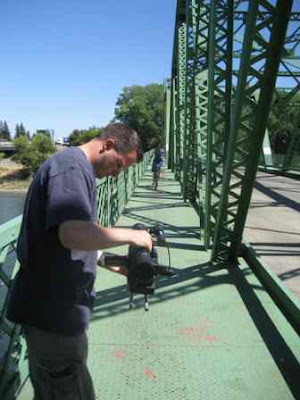 Hunting butterflies in a field at 60fps. 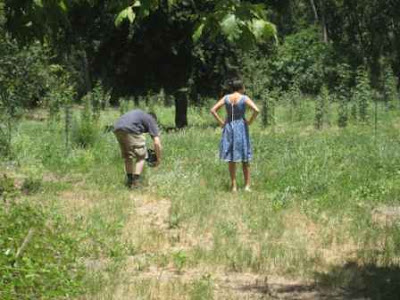 Trying to figure out the HD->SD in camera downconvert workflow. 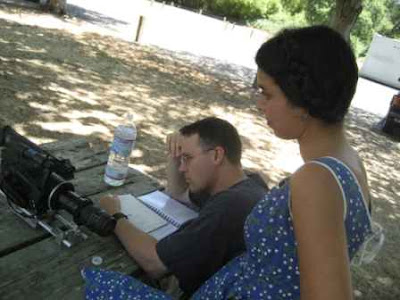 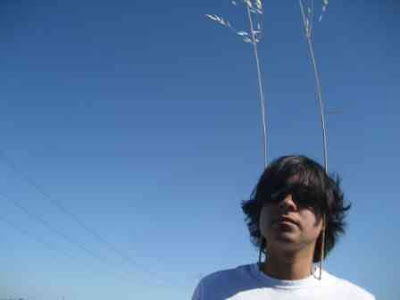 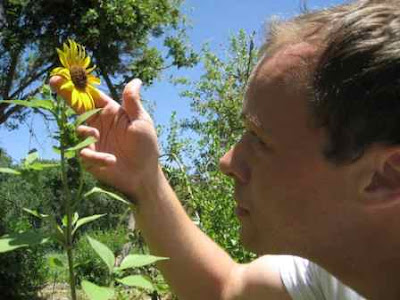 Wading thru the safflower field. I had to wear shorts that day, Ouch! 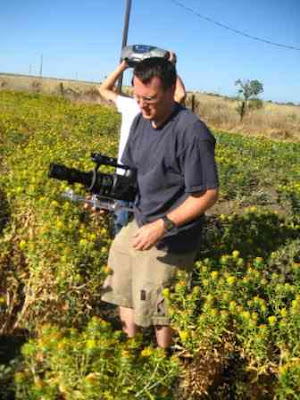 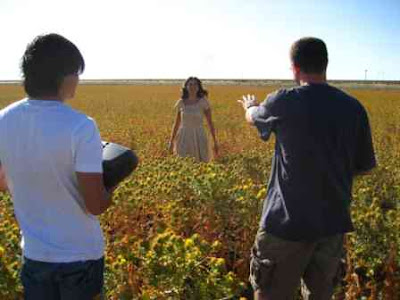 A snake slithered by during the shoot. See if you can spot it's cameo in the video... 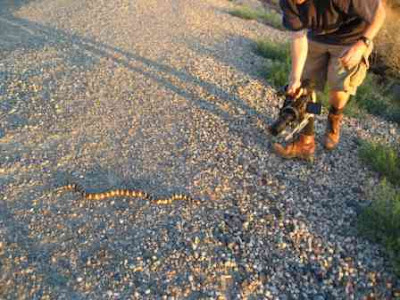 If I lived in springfield...

...this is what Siobhan and I would look like: 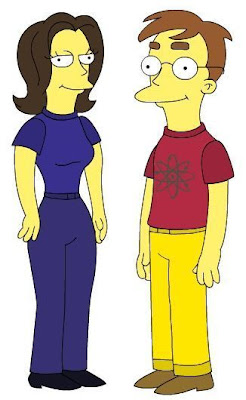 Super cool. I made it here:

This last weekend was my father in law’s 60th birthday. We celebrated the event at my in-laws cabin up by Yellowstone. Siobhan drove up the week earlier with her mom. I left after work Wednesday and picked up my cousin-in-law Zach at the train station. From there we picked up a rental car at the airport for the long drive (for only $150 for the week, it was well worth it not to put the miles on my car…)We drove through the night, stopping at the Red Lion in Winnemucca, Nevada.

We got up early with the hopes of making it to Rigby Idaho by 4pm. Why Rigby Idaho? Rigby is the home town of Philo T. Farnsworth, the inventor of electronic TV capture and Display. He came up with the idea in the 1920’s while plowing his families potatoe (Quayle Rules!) fields at the young age of 14! Rigby Idaho also houses the Philo T. Farnsworth TV and Pioneer Museum. They are open from 10am to 4pm, and I’ve missed them before. We hauled our little Chevy Colbalt as fast as reasonable and made it there by 3:45. Enough time to pay the admission ($2) and enjoy the simple homage to someone who changed the world with and Idea in a potatoe field. The museum was nice and quaint, but I think Philo deserves more…

After the Museum we drove up to the cabin and got to visit many relatives from Kentucky, including Aunts, Uncles, Cousins, Grandpas and Grandmas. A rare opportunity.

The next couple of days we spent touring the park. It’s basically too amazing to go into details. Amazing geology (geysers) , wildlife (buffalo) , and food. (buffalo burgers) If you’ve never been, go. Give yourself 3 days.

The only unfortunate part of the trip was the demise of Mammoth Hot Springs. Mammoth Hot Springs and Old Faithful are the parks two big draws. About a year ago, there were some earthquakes and the springs dried up about 98%. The whole hillside used to be a rainbow of intense colors. Now it’s dried and cracked and looks like the moon:

On Sunday my cousin and I went canoeing along Henry’s fork of the Madison River. Very nice. A little shallow at times, but crystal clear. That afternoon Zach, my wife and I left back for California. After consulting with the GPS, I discovered that by swooping down past Salt Lake City, it only added 10 minutes to the total trip. I always like to drive a circular route rather than straight and back if I can. I was surprised at how nice that part of Utah is – absolutely picturesque. Soft green rolling hills leading to rocky peaks. Nice. After swinging through SLC, we hit the Bonneville Salt flats just as the sun set. Magic hour in a truly alien landscape. Totally cool. I’ve always wanted to shoot a music video or SciFi there. Again if you have never been- stop by if you can. I wouldn’t budget 3 days though. After about 3 minutes you get the point.

About 10 minutes past Bonneville is Nevada, and the first town – Wendover. Like any border town in Nevada, there are Giant Casinos. We stopped at Paradise Beach or something like that. Huge. Big as any Vegas casino. We ate at some aquatic themed restaurant. Shrimp cocktail and ribeye – yum! We stayed the night about an hour past wendover in some town I can’t remember. It had two hotels and a gas station. Next time we will just stay in wendover.
Posted by Unknown at 2:23 PM