The finest example of in-camera wirework and matrix style bullet time effects can be seen here:

These are for the Positive Coaching Alliance, and this one features Sports Anchor Jim Crandell. We shot it in a basketball practice facility, with overhead mercury vapor/metal halide lights. Our tungsten units seemed to match with a 1/2 CTB. The shot went well, four set-ups in 3 hours, including a dolly shot. 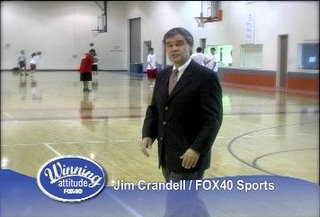 Here is the opening shot. I wanted to have this framing, but had to fight the sunlight coming in from behind the talent. I had a minimal light kit and time to set up, so i just used one light, focused in tight from far away.

I had the talent track towards the light, so he never went in and out of the light. also, placing the light far back (30-40') helped keep the light gain as he neared the lamp (5' travel) to a minimum. In addition to the fluorescents in the background, there were Metal Halide lamps above and sunlight coming in the windows. I covered the 650 with opal and half blue, that in combination with reducing the chroma in the matrix helped to bring the color mix to a useable level. 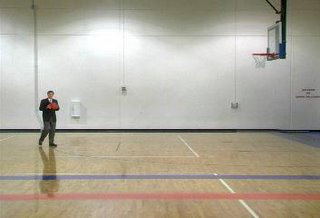 This is a comparison between the raw image and the post affected image. 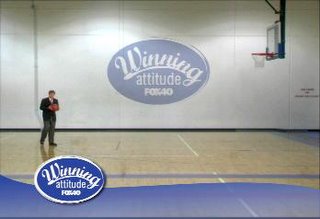 Our graphics guy (Rey Jaraba) took out some of the distracting electrical boxes and conduit, and posted a photorealistic logo mural in after effects. The shot slowly zooms in, and the mural tracks with it to make the image look believable. 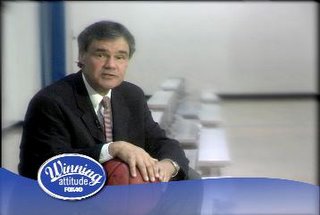 For this shot, I re-arranged the bleacher seating to give a sense of depth perspective in this shot. We also defocused the background in post to isolate the foreground image. 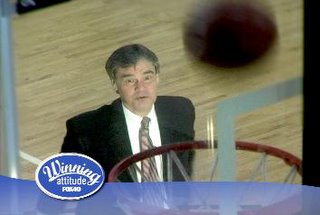 For the final shot I took advantage of a loft/snack area above the courts to get this perspective. Moving a couple of tables together gave me a higher perch to give me the angle I needed. It only took a couple of takes to get the right "Swoosh"

Ah the one man band… interesting to stop and listen, but never what you would want to listen to while relaxing at home.

I just finished editing a spot I shot for a marble and granite company. The spot turned out great, but the shoot was… hard. I was just on the cusp of coming down with Bird Flu/SARS/West Nile Virus, when my assistant called in sick. Well we already rented the gear and made arrangements, so the show must go on. Luckily I was able to pull it off because all the shots were MOS, no sound. Also, the location had decent ambient lighting. I was able to get through the whole thing without setting a single light or stringing a single stinger, so the whole shoot was about composition and movement.

This shoot was scheduled for two locations, a warehouse in Sacramento, and a factory showroom in Stockton, about an hour away. In total I got off 16 shots at 2 locations in about 9 hours, half those being dolly or jib. The one thing that did work out was the jib we rented. I originally asked for a portajib, but got talked into a less complicated cobra crane by the rental house. The Cobra crane mounts right on to the tripod head (as opposed to the sticks). The idea is that you would remotely tilt the camera by tilting the tripod head. I never did this. That always seemed to be putting too much stress on the head, so I just locked it down. (the porta jib would have acted in the same way). After this, I am a big fan of the Cobra crane. Once I put a Sony quick release plate on it, it took under a minute to set up/break down. Easy. Well, the design inspired me enough to build my own jib. I used to have one built out of 4” square aluminum tubing that could fly an Arri BL4, but that thing was just too bulky to carry around. This new design should be lighter and possibly modular. I will post more once it is built. At any rate, here are some screen grabs from the shoot: 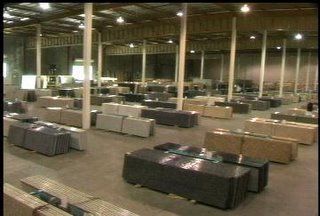 This first shot is the warehouse. I climbed on a palate of 4x8 plywood sheets about 5 feet off the ground and set up the jib. Total travel for the camera was from about 6’ off the ground to 12’ up. Not much, but combined with the height, it felt like a larger crane was used. 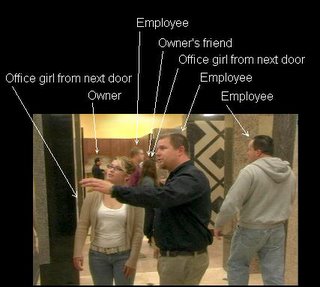 This shot was a dolly into the showroom. It had good movement, but was a bit sterile. As there were no actors budgeted, I grabbed everyone in sight, and even sent out employees to grab more people. Notice the employee in the grey sweatshirt. His job was to walk into the scene purely to motivate the camera movement. Unmotivated movement always feels creepy or uneasy to me, but just by adding a foreground element to motivate the movement or “lead the camera in”, it feels a lot more natural. The viewer accepts the movement instead of being distracted by it.
Posted by Unknown at 7:42 PM