This spot was for a bankruptcy attorney center. The client provided a script that… well, read like a lawyer wrote it. It hit as many bullet points as possible that the :60 and :30 second versions would allow. I took their main points and wrote a script with a more emotional appeal. Instead of featuring a spokesman, it featured a young mother who got herself into financial trouble. The idea being that any potential clients would identify with the more “human” character.
Here are some storyboards from the livingroom scene: 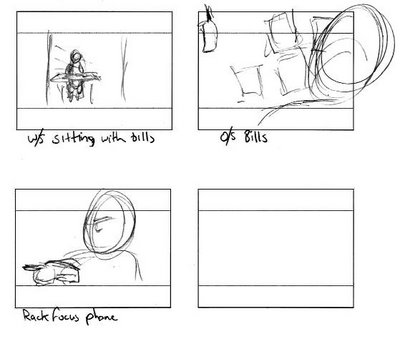 Now on to the 35 adapter… I’ve been working on a 35mm lens adapter (static design based on Edwierdo and Marleen’s designs) for the DVX for a couple of months now and I finally have a working prototype, although it has a few flaws. I only used 5 micron aluminum oxide to grind the ground glass. 3 micron is preferred, but at the time I ordered parts I couldn’t find any online. I was worried about the grain, but after checking the footage on a hi-res monitor, I’m very happy. The problem I have is with vignetting. Part of the problem may be caused by the lack of a condenser lens, but the main problem is due to the +10 diopter. It’s an achromat which is nice, but it’s not strong enough, and only 42mm wide, as a result, I get some hard edge vignetting around the corners. I have plans to use a 50mm +16 or +20 achromat, but that will be a little while before I can make that modification. Once I get a decent working unit, I will post about it. The lens is a 50mm f1.7 minolta, and tests show that the frame matches the 35mm sill frame closely. I really wanted to use the adapter for some of the shots in this spot, the “dark moments” as the main character is faced with financial problems. Fortunately the vignetting plays into that feeling, the dark corners make it feel like her world is closing in. Also, the spot will be letter boxed, so most of the hard vignetting will be blocked out. Here are a couple of screen grabs from the living room scene, one is a slow dolly in, and the other is a rack focus (love that shallow DOF!) from the actor to the phone. Both of these were lit only with shiny boards from outside the windows. 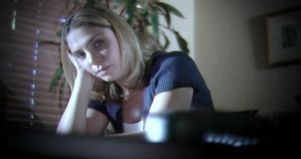 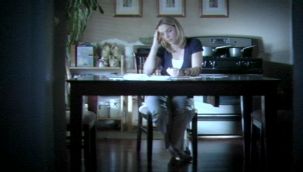 Here is the lighting diagram for this scene: 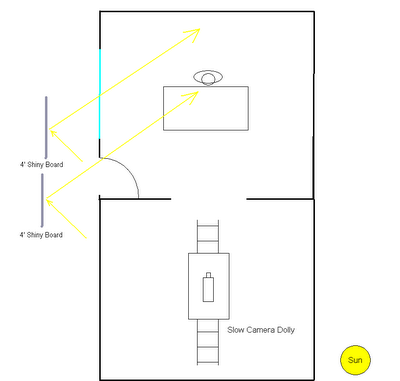 This next still is from the lawyers office. It’s shot clean, without the lens adapter. Lighting was natural light from the windows and modeling with 2 500watt PAR64s with full CTO, and a back light with a 75watt reflector bulb in a Lowell light with full CTO and on a dimmer to dial it in. Also below is a behind the scenes still that shows the parcan set up. We were on a second story location, so shinyboards were not an option. 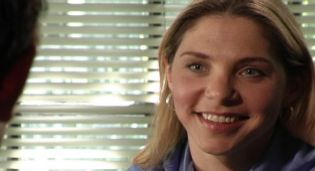 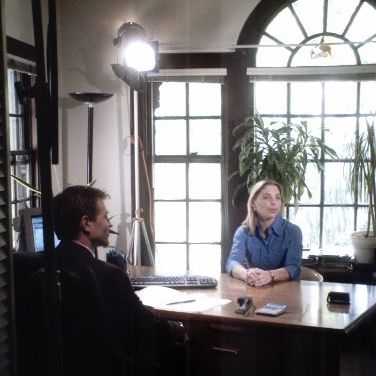 This set still shows the ambient light and one of the PAR64s with full blue.