This morning we took the train from Venice station (on the island this time…) to Milan. 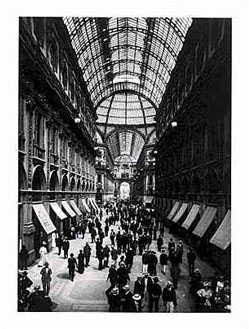 Once we got into town we visited the galleria, an outdoor shopping district covered in 1860 with a glass and steel dome, and equipped with the newly invented electric lights. We also took a spin on the mosaic bull oysters for luck. Seriously. 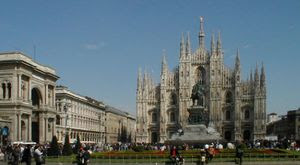 Next door was the Duomo, the second largest gothic cathedral in the world.

After that we visited the Castello Sforzesco, a gigantic brick castle, built just in time for Napoleon to take it over.
Here is another cool VR:
http://milan.arounder.com/city_tour/IT000005332.html 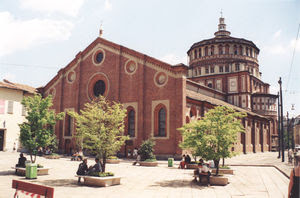 Finally we stopped off at the convent of Santa Maria delle Grazie to visit Leonardo’s (Davinci, not the Turtle…) Last Supper. We were surprised at how low-key it was. First of all, the church itself is located on what once was the outskirts of town, not in the city center. Second it’s a fairly small church, and the fresco itself is not in the church, but in the unadorned building next door, the dining hall for the monks. Third, it was not crowded, although this may be due to the need to buy tickets months in advance. These are all in contrast to the Mona Lisa, housed in the Louvre, surrounded by hundreds of gawking tourists pressing themselves up against the protective glass, cameras flashing away… 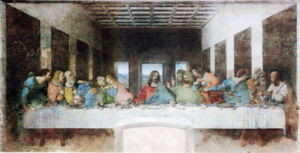 It’s amazing the painting has survived at all. Read the quick paragraph of it’s amazing volitle history here:
http://en.wikipedia.org/wiki/The_Last_Supper_(Leonardo)#Damage_and_restorations

Italy is interesting. One thing always strikes me is how everything is in an advanced state of deferred maintenance. Cracks in the sidewalks and abundant weeds. Broken and unwashed windows. It’s like that everywhere across the country. It’s more third-world than the former Soviet states of Hungary and Czech. All the train stations are left over construction from Mussolini himself. Interesting.

That evening we took an Air Dolomiti flight back to Munich and tok the tram into town to our hotel.