First keyboards are different. I have to keep looking up and down t make sure I didn't just type "kezboard" or put in random Ö's or Ä's, so forgive me if something is weird.

Second, It's just plain un-American to charge to use the bathroom.

This morning we left Budapest early. It took about 3 hours to travel (including a great Tesco stop) to Vienna. It took almost 2 hours to park and reach our hotel. We got lost and asked a guy on a bike for directions and he told us to turn left then go a couple of lights, then turn right, then.. well... best of luck!

After we found our hotel and checked in, we toured the local cathedral, big old and smokey. Siobhan noticed a sign for "catacomb tours" It was only 4 euro, and was totally worth it. Just like you would imagine catacombs under a cathedral from the middle ages. Think stacks and stacks of bones from black plague victims. No pictures allowed as it was a working graveyard. 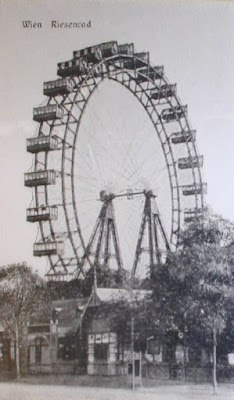 After that we took the subway to the giant 1879 Ferris wheel. This thing was huge. Instead of each spoke holding a bucket or bench for 3 people, each spoke held basically a wooden train car.

Last we caught a concert-opera-dance performance of Mozart and Strauss. Now, I can appreciate Mozart, but I enjoyed Strauss. I guess it's analogous to appreciating a fencing match, but enjoying a demolition derby. I also relates to the tact that I couldn't help visualizing the dancers as two overweight auto mechanics performing the same moves. Very entertaining.