We left Vienna early and head3ed for the Czech Republic. It a was a lot easier to get out of the city than in. Our route took us off the main autobahn and on to a winding 2-lane highway thru a lot of small villages. This was like stepping back in time before the 1992 soviet break-up, not much seems to have changed. It was nice to see more of the true Czech country, rather than the “designed for driving comfort” rest stops of the Autobahn.

We stopped in a small town for lunch and I successfully ordered (pantomimed) an eastern European style hot dog for myself, and a chocolate crepe for Siobhan.

We made it into Prague with little difficulty and checked into out hotel, the “Hotel Mucha”

Prague is a very art Nuveau city, and Mucha was one of their biggies. Even if you don’t recognize the name, you have seen his work: 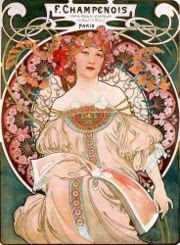 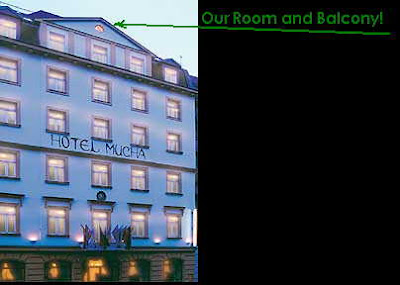 We had a great room, on the 6th floor, the top floor, and had the hotel’s only rooftop balcony. 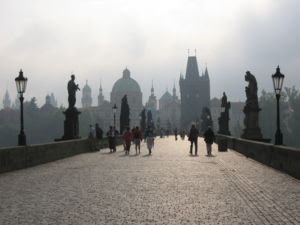 We took the subway out to the hill top castle and after quite an up hill hike, had the most spectacular view of Prague. We then hiked down and visited the Charles Bridge.

We also stopped near there and had an amazing meal of goulash and stuffed peppers – Yum! Hungary and Czech has had the best food by far this trip. After dinner we visited the “Medieval Tortue Museum”. Jack Bauer meets Monty Python – Ouch! 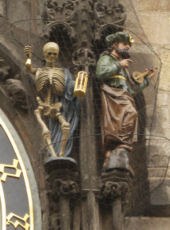 At 9pm we caught the ringing of the gian mechanical astronomical clock, with a parade of animated saints and nobels, and with death ringing the bell. Very cool. 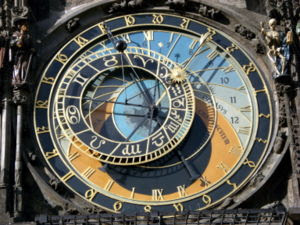 A sizeable crowd had gathered to watch too. It’s cool to think that crowds have been gathering here to watch the show since 1490!

At the clock we met for a night time walking tour - “the ghosts of Prague” Very fun.