After the stairwell shot we moved upstairs to shoot two adjacent halls.

Lighting halways is such a conundrum. Luckily (and by luck I mean exhaustive location scouting) we foud a great hall with many windows, neutrally toned walls and lots of nooks to hide lights.

We scheduled the shots so no direct light would be coming in the windows, and so the sun could hit the shiny boards ata usefull angle.

The halls were lit from outside wby bouncing shiny boards in and hitting the ceiling, and from inside by hiding 4x Kinos in doorways. We also 400watt Jokers to make hotspots on the far walls. Some of the shots were on sticks, some on steadicam, and some on the steadicam on the dolly in low-mode. 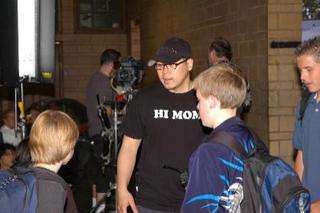 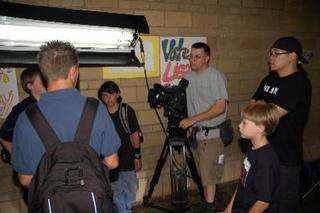 Erik and myself catching a quick closeup before moving on to the next set up. 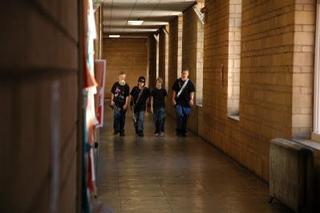 A long (telephoto) shot of the band memebers walking down the hall. 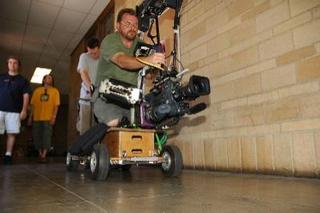 A steadicam-dolly shot operated by Bret Allen, leading the kids down the hall. This is rehearsal. For the take we mounted a 4x4 Kino on the dolly to light the faces of the talent.