That afternoon we shot the band performing on the stage, and it had to be lit to sell the viewer into thinking it was a large concert stage. Thanks to Gaffer Dave Bunge's experience and expertise, we had the stage turned around and lit in under 2 hours. We did a lot of back lighting and used a hazer to fill the air. Sometimes the smoke was a little too thick. Not for us, but... during the first take, it set off the fire alarm, and we had to evacuate all cast crew and extras until the alarm stopped. Thank goodness the fire department did not show up... After that we used less smoke.

We did the wide shots first so we could let the extras go and concentrate on the individual band performances. We used a 400w Joker w/o the lens as a sweeping backlight beam across the audience members heads. We also used a set of ACLs and nine-lights to blast light from behind the band. It all came together great.

This time we decided to use 2 pieces of our wide curve track instead of just the doorway dolly. We couldn't get as tight of an arc, but it was better to have the repeatability for focus as we passed back and forth. And even though it took a couple of minutes to set up the track for each member, it actually ended saving time as the dolly operator did not need to reset for each pass, he could just go back and forth allowing me to get the shots I wanted with each pass.

If I had to change one thing, I would not have used the red gells. I know from past experience that red lighting in video makes the subject look soft, but I was hoping that the Varicam could handle it... no. Should have used a dark amber or straw. 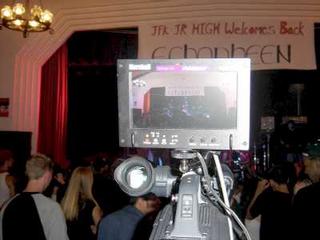 The Varicam with the very nice onboard 9" monitor. Great for operating with those fast moving dolly shots. Also good for letting the dolly grip have a view for what you are getting. 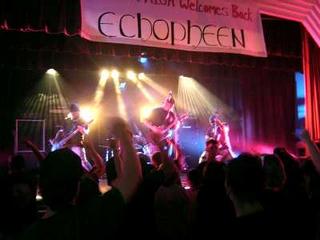 The stage with all the lights on. 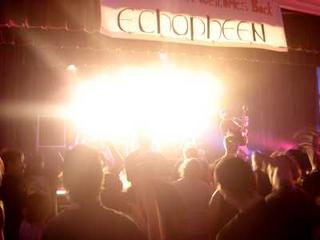 What it looks like with the 9-lights on full. 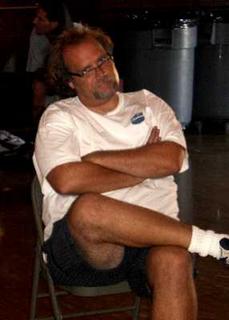 Gaffer Dave Bunge patiently allowing us to go 2 hours over... 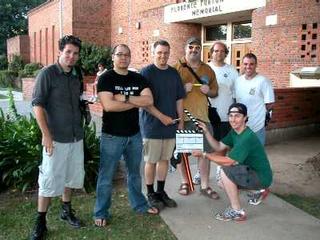